June 2019: HADSST4 was added to the analysis, resulting in a slight increase in amplitude of most pre-1950 ENSO events due to better constraint of quality control procedures. The standard deviation of available SST datasets used in the ENS ONI is now also provided.

July 2019: ERA-5 was added to the analysis & interpolated to a 1x1 degree grid to make it more comparable to other datasets used in the ENS ONI. Its addition resulted in little notable change in the ENS ONI after 1964. The ENS ONI quality control procedure was reevaluated for the 1877-78 El Nino, resulting in more realistic amplitude evolution during the growth phase of this "Super" El Nino in 1877. Changes in the 1877-78 El Nino also implicated nearby portions of the record, leading to an extremely modest modification of other ONI values from 1865 to 1890.

October 2020: HADISST2.1 was added to the ENS ONI, significantly increasing the quality of the ENS ONI prior to 1900, and the new quality control procedure used to filter out potentially spurious data in the ENS ONI is significantly less stringent. OISSTv2 was upgraded to OISSTv2.1, which may slightly impact recent ENS ONI data.
ENS ONI now uses median SSTs instead of mean SSTs from available datasets at each time step to better protect the ENS ONI against outliers and preserve the amplitude of pre-1950 ENSO events. Utilizing the median SST also more accurately depicts well known asymmetries in ENSO amplitude stemming from more efficient Bjerknes feedbacks and stronger non-linearities between SSTs, surface winds, and locally forced convection in El Ninos. To better reflect this asymmetry, ENSO event intensity definitions were altered from, with "Super La Nina" no longer being utilized. However, keeping in spirit of the original ONI, ENS ONI still utilizes 3-month running means of monthly ONI values to determine tri-monthly ENS ONI values. The ENS ONI is also now accompanied by uncertainty estimates, determined by inter-dataset spread at each monthly time step, approximated as 2σ, generally corresponding to 95% level statistical significance.

​The Ensemble Oceanic NINO Index (ENS-ONI) is one of the longest running, real-time, instrumentally-based ENSO indices that has been developed to date, spanning from the mid 19th century to the present. The ENS ONI also arguably provides the most complete and up-to-date description of structural uncertainty amongst a multitude of SST reconstructions and reanalyses (for more on structural uncertainties see: Kennedy (2014)). The ENS ONI closely follows the methodology of the Climate Prediction Center (CPC), and is computed by using seasonally averaged sea surface temperature (SST) anomalies in the NINO 3.4 region (5S-5N, 120-170W) over the Equatorial Pacific as defined by Barnston et al (1997). Following this publication, the NINO 3.4 index became one of the most popular ENSO indices at the turn of the 21st century. The exceptional combined intensity and longevity of the 2014-16 multi-year "Super" El Nino event in the context of modern single-year modern "Super" El Nino events in 1972-73, 1982-83, & 1997-98 spurred the creation of the ENS ONI. The ENS ONI attempts to provide as long and reliable of an instrumentally-based ENSO record as possible while maintaining simplicity in its construction and being available for real-time scrutiny. While the quality and quantity of data platforms and spatiotemporal coverage is relatively less reliable, less numerous, and more sparse respectively, the number of ENSO event samples under the ENS ONI is more than double the "reliable" record (1950-present).

The ENS ONI is intended to be a predecessor product to the Extended MEI version 2 (MEI.extv2), which is currently in production. For more on MEI.extv2 see my 100th Annual American Meteorological Society (AMS) Conference poster presentation: "Reanalysis of the Extended Multivariate ENSO Index"

The ENS ONI utilizes World Meteorological Organization (WMO) 30 year climatological base periods that are updated every 5 years (Table 1) to account for significant changes and inhomogeneities in the background climatic and observational mean state in the last few centuries. Raw data rounded to the nearest 0.01C was attained and datasets such as Kaplan's Extended SST Version 2, were converted from anomalies to raw data using their respective climatologies. A 99% confidence interval is utilized to filter out datasets with potentially "spurious" data each month beginning in 1870 and monthly new averages are computed from the remaining data. This procedure increases the stability, robustness, and reliability of the ENS ONI, provides a more realistic depiction of ENSO events and increases their amplitude slightly, especially before 1950 when there's more uncertainty and spread amongst available datasets, in addition to less data. From the nearly 30,000 NINO 3.4 monthly SST values from each individual dataset that are used to construct the ENS ONI, the aforementioned quality control methodology filters out <5% of the data.

Although the ENS ONI is comprised of a multitude of datasets with disparate spatial and temporal resolutions, and only utilizes SST anomalies in a seemingly inconsequential region of the equatorial Pacific, the standard deviation amongst various available datasets appears to be somewhat reflective of global trends during the instrumental record. This very crude estimate of parametric uncertainty reflects structural uncertainties amongst available datasets and their sensitivity to data input, which occurs because most datasets in the ENS ONI are effectively not constructed the same way and many datasets include different versions of ICOADS and/or other observational sources (especially reanalysis datasets) respectively. Both are important points regarding uncertainty in the instrumental record that tend to be less frequently discussed in literature. Nonetheless, from the standard deviation of SSTs in the NINO 3.4 region, three primary periods of contention and notable disagreement emerge from the observed record, namely before the 1877-78 "Super" El Nino, and during the first and second World Wars. The period before 1877-78 and the first World War is largely explained by a lack of data with the latter data outage being associated with ships being sunk during the war. The apparent discrepancy amongst available datasets in and around World War 2 however is multi-faceted, featuring both a similar loss of potential data from ships sunk in the war in addition to paradigm shift in how SST observations were taken, with many ships switching from insulated bucket to engine room intake (ERI) measurements of SST as well as additional sampling uncertainty emanating from significant changes in the time of day most observations were collected (see figure 3 below) (Freeman et al (2017)).
​These three aforementioned periods that are the source(s) of significant discrepancy in the instrumental record are highlighted in orange & labeled in figure 4 below. 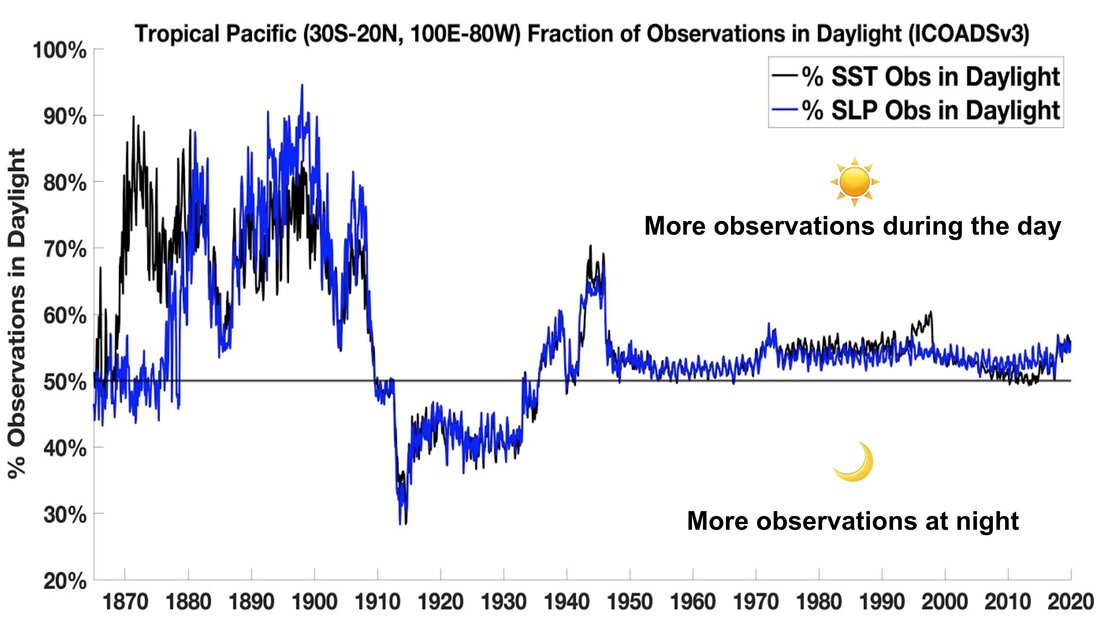 Figure 4. Ensemble Oceanic Nino Index uncertainty (annually smoothed) (1867-2019)
​Created using Matlab 2019a
Attempts at reconstructing ENSO using multiple datasets and the Oceanic Nino Index has been attempted before as recently as Huang et al (2016), however their analysis was strictly limited to only several SST datasets and over the period 1950-present.
Following the methodology of Wolter and Timlin (2011), El Nino and La Nina events are further binned into Weak, Moderate, Strong, and "Super" based on their maximum tri-monthly ENS ONI peak percentiles shown below in table 2. El Ninos, Neutral, and La Nina are generally assumed to each occur roughly one-third of the time, however unlike Wolter and Timlin (2011), the ranks are flipped such that El Ninos occupy the lowest ranks and La Ninas the highest, we use all bi-monthly periods to rank ENSO instead of individual bi-monthly periods, and the El Nino and La Nina thresholds correspond to the lower tercile (33%) and uppermost tercile (67%) respectively as opposed to the end of the 3rd decile (30%) and beginning of the 7th decile (70%), which does not change the conclusions we draw here, although it increases the detectability of ENSO events ever-so-slightly in ENS ONI. The distribution of El Nino and La Ninas using the ENS ONI with NOAA CPC’s definition of 5 successive tri-monthly periods greater than or equal to +/-0.5C, found that La Nina and El Nino occur about 30% of the time. Therefore, the choice of ENSO threshold here is well within reason and similar to other popular ENSO indices and previous published studies.

Thus, going by the definition of ENSO noted here, El Ninos occur when the ENS ONI values are in the top 33% of all ENS ONI values for each tri-monthly period, while Neutral ENSO and La Nina correspond to the middle third and lower third of bi-monthlies respectively. Further distinctions to denote Weak, Moderate, Strong, and Super (very strong) ENSO events were also made here as was done with MEI.ext and MEI. Similar to Wolter and Timlin (2011), moderate El Ninos and moderate La Ninas were assumed to be ongoing when the MEI.extv2 bi-monthly percentiles were in the 2nd (10-20%) and 9th deciles (80-90%) respectively. Also similar to Wolter and Timlin (2011), the minimum threshold for Strong El Nino and Strong La Nina is defined as the 10th and 90th percentiles respectively.
A further distinction is made to identify extraordinarily powerful El Nino and La Nina events. The motivation for this is attributable to the fact that 4 very intense El Nino events (1877-78, 1982-83, 1997-98, 2015-16) are all more intense than not only any other El Nino, but all other ENSO events in the observed record (Table 5). Furthermore, all of these El Ninos events have triggered exceptionally large and widespread climate anomalies across the globe, and the term “Super El Nino” has become increasingly popular and acceptable nomenclature in the atmospheric science community (Hameed et al (2018); Zhu et al (2018); Bing and Xie (2017); Chen et al (2016); Hong (2016); Latif et al (2015). 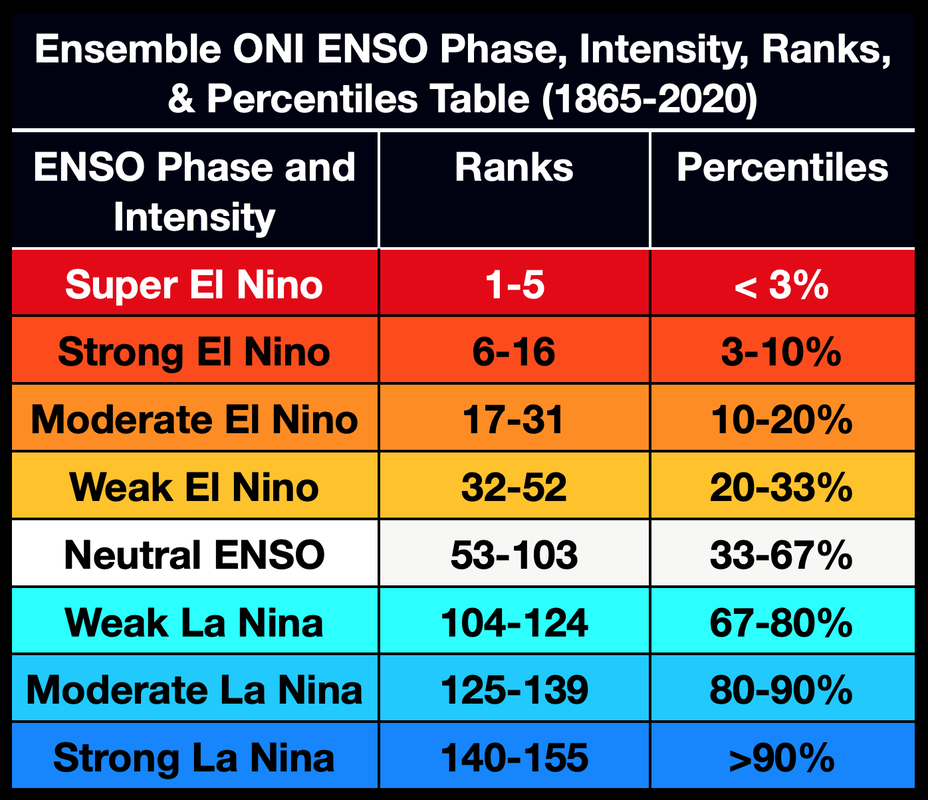 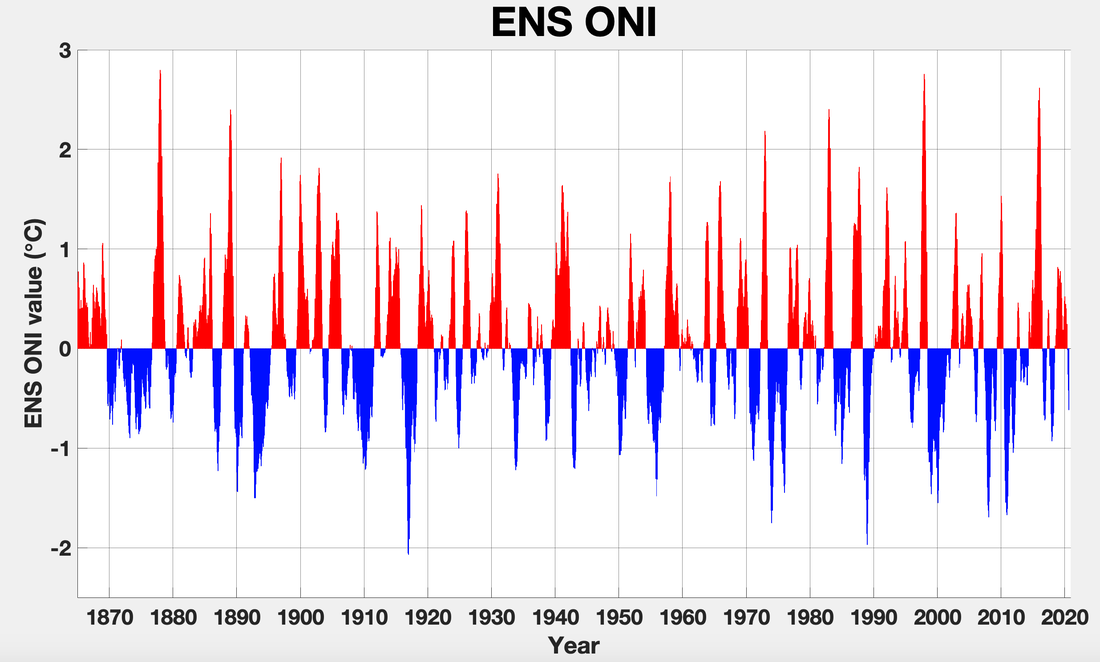 Figures 6-20. ENS ONI tables (by decade, except for 2015-2020).
Acknowledgements
I want to provide a special thanks to my peers at UNC-Charlotte, my advisor Dr Brian Magi, and Terrell Wade (@Thunderstorm381), and so many others for their support, advice, and providing me with the necessary tools and coding skill sets to conduct this project as part of my ongoing masters thesis. Special hat tip to Terrell Wade on providing some useful insight to significantly improve the efficiency of the quality control procedure used in the ENS ONI.

Rayner, N. A., et al. (2006). "Improved analyses of changes and uncertainties in sea surface temperature measured in situ since the mid-nineteenth century: The HadSST2 dataset." Journal of Climate 19(3): 446-469.