MAJOR UPDATES & REVISIONS TO THE NCEP-NCAR MEI
Jun 2019: An additional normalization step was applied to the final weighted, standardized NCEP-NCAR MEI EOF data that's presented in below both Excel and tabular form. It was discovered that a notable annual cycle in variance existed w/ distinct minima evident in the northern spring and summer, as shown in figure 1. This means that the virtually all of the new MEI data values will be slightly inflated in this version of the NCEP-NCAR MEI, especially those in the spring & summer where the old NCEP-NCAR MEI variance was low. Furthermore, the ranking definition was modified slightly and is described in further detail below. 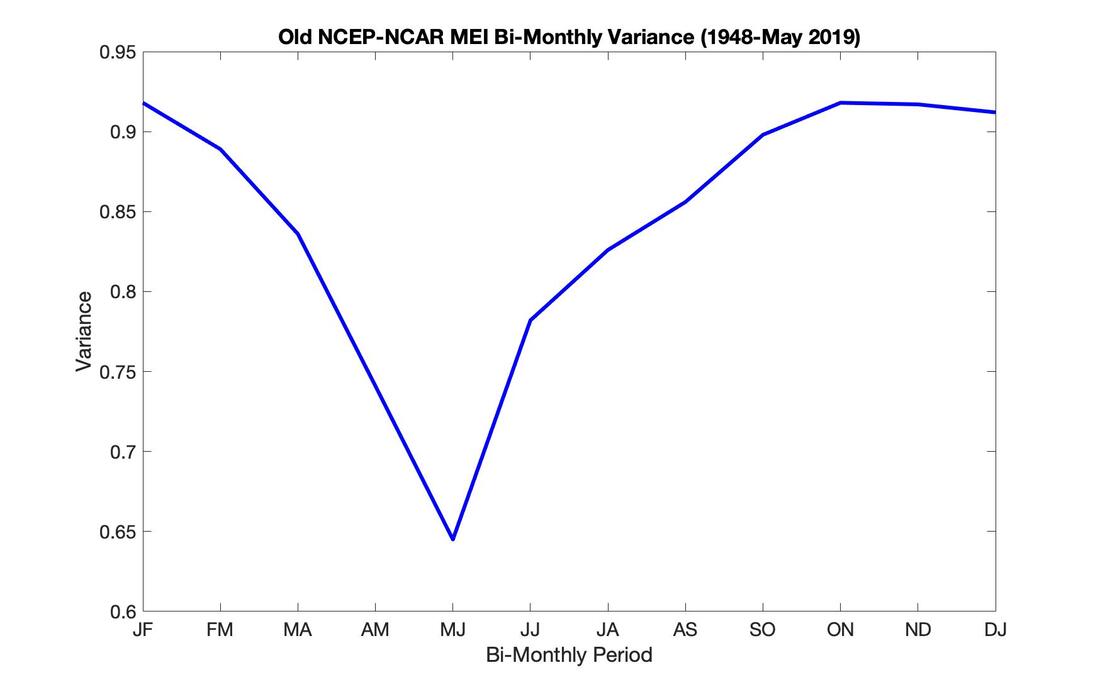 Here, the same original definition of the MEI is generally utilized, however several adjustments were made to increase the quality and reliability of the data.  The detrended PCs in this MEI Index are based on more and newer data (1948-2018) as compared with Wolters MEI (1950-1993) and the detrending step along w/ the utilization of 30-year sliding base periods reduces the AGW signal in the data that is still present in the original MEI. Also, this version of the MEI is 2 years longer (1948-Present) compared to the original MEI (1950-present) and although it utilizes a slightly lower resolution (2.5 degree) National Centers For Environmental Prediction/National Centers for Atmospheric Research Reanalysis version 1 (NCEP/NCAR R1) dataset (hereafter referred to as NCEP R1), NCEP/NCAR R1 usually updates several days before ICOADS, and is spatially and temporally complete and less noisy compared to ICOADS. The spatially & temporally complete NCEP R1 dataset also means the spatial clustering step is unnecessary before performing any EOF analysis (personal communication via Klaus Wolter). In conjunction with 5 observed variables utilized in the original MEI (SST (SST), Surface Air Temperature, Sea Level Pressure (SLP), zonal wind (U wind), & Outgoing Longwave Radiation (OLR)), this version of the MEI adds precipitable water to its real-time analysis but removes meridional wind (V wind) due to potential coupling w/ meridional modes whose origins are likely more directly linked to mid-latitude Rossby wave breaking from the winter & spring hemisphere rather than ENSO (Vimont, D. J., J. M. Wallace, & D. S. Battisti (2003)), The addition of precipitable water also in an attempt to capture more variance attributable to ENSO than the classical 6 parameter MEI that included V wind.

Furthermore, this new version of the MEI using NCEP-NCAR Reanalysis also weights each EOF by the amount of variance they explain in their respective domain. It was noted (as also shown below in figure 2) that variables like OLR & precipitable water often explain significantly less than half to a third of the variability associated w/ surface and sea surface temperature for all bi-monthly periods. The original MEI that's been currently discontinued on NOAA ESRL, weights each EOF equivalently, which significantly affects the amplitude and occasionally even the sign of ENSO. It's also worth noting the pronounced seasonal cycle to EOF explained variance, with higher explained variance by the leading EOF during the northern fall and winter, and a relative minimum near the vernal equinox. This effectively means more ENSO variability is partitioned to higher order EOFs near the equinox, with one of those EOFs (the 2nd EOF) constituting "modoki" or central Pacific El Nino as shown in figure 3.

A condensed, tabulated summary of the aforementioned changes made to the original MEI are presented in table 1 below. 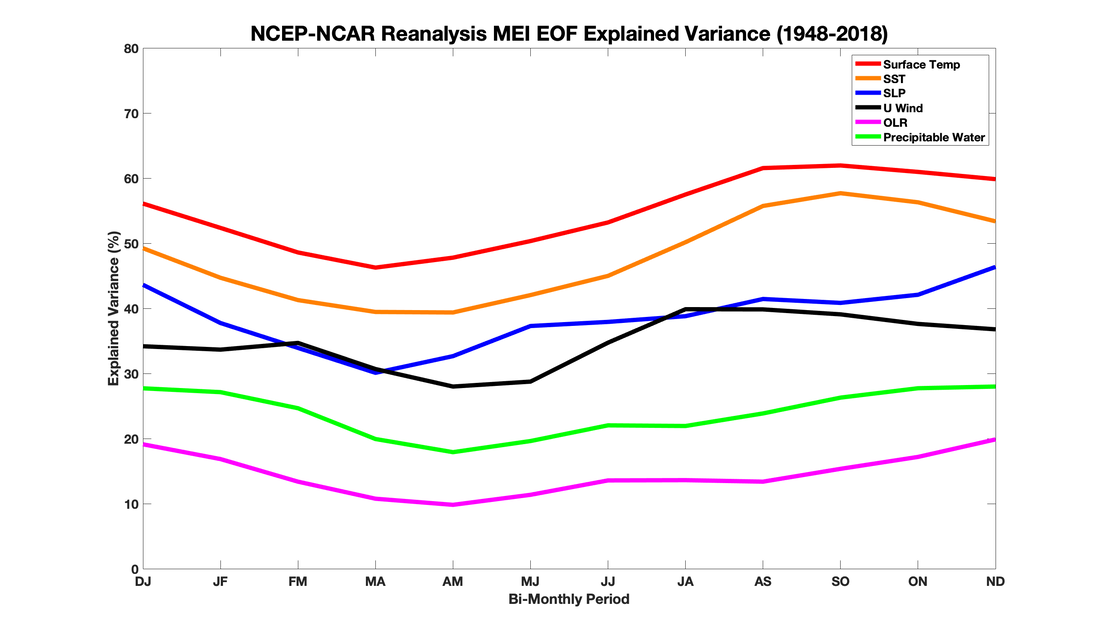 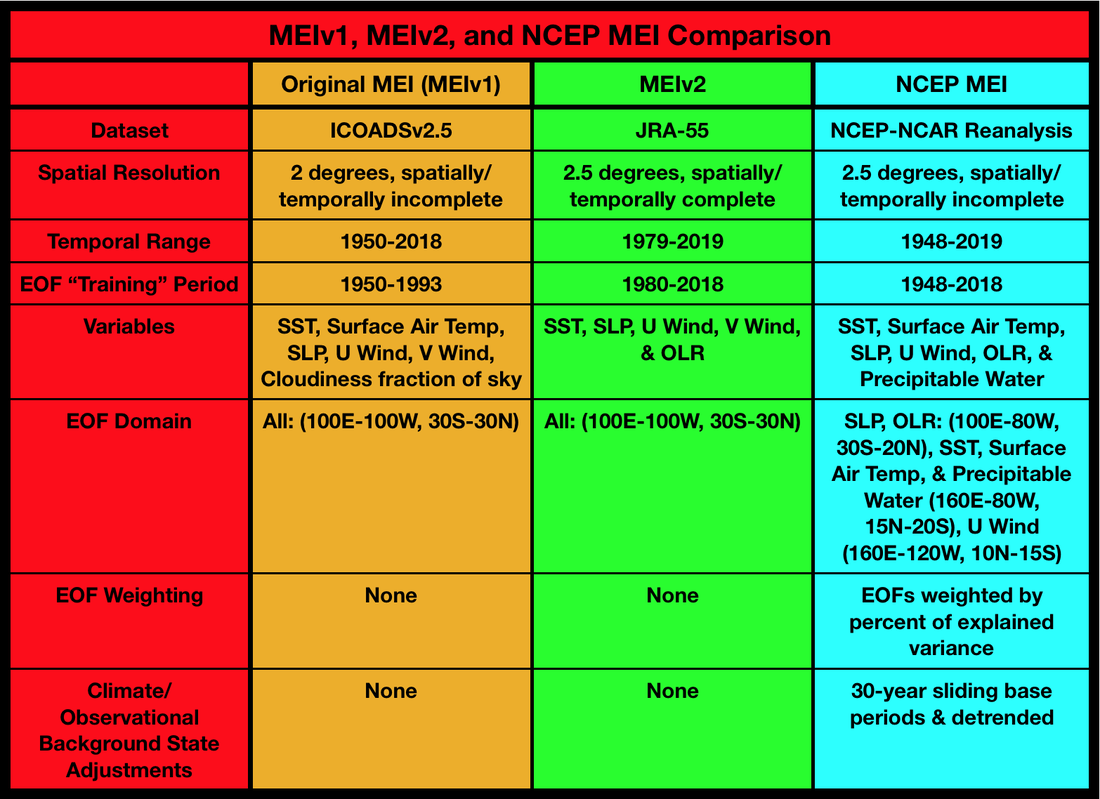 Table 1. MEI.v1 (orange), MEI.v2 (green), and NCEP-NCAR MEI (blue) comparison.
For those interested how well the NCEP-NCAR Reanalysis MEI compares the original MEI (MEI.v1) and new MEI.v2 recently released by NOAA ESRL, the Pearson linear correlation coefficients between the NCEP-NCAR MEI and these other versions of the MEI are 0.93 and 0.94 (i.e. r=0.93, and r=0.94) respectively after a 30-year sliding base period and detrending was applied to MEI.v1. The sources of divergence between these three indices, as also alluded to above, lie the different datasets used to analyze the MEI, EOF weighting, EOF training period (NCEP-NCAR MEI here trains the EOFs w/ about 25 and 32 additional years of data vs MEI.v1 and MEI.v2 respectively), removal & replacement of meridional wind from the original MEI, & different regions used to compute the EOFs that constitute the MEI, as well as the additional normalization step that was applied in this new version of the NCEP-NCAR MEI. It was noted in post-processing that during periods of major ENSO phase transition, the NCEP-NCAR MEI usually responds to forthcoming changes in the base state faster than either MEI.v1 or MEI.v2, which may be a testament to the different EOF regions used in the NCEP-NCAR MEI that increase the explained variance of the leading EOFs. 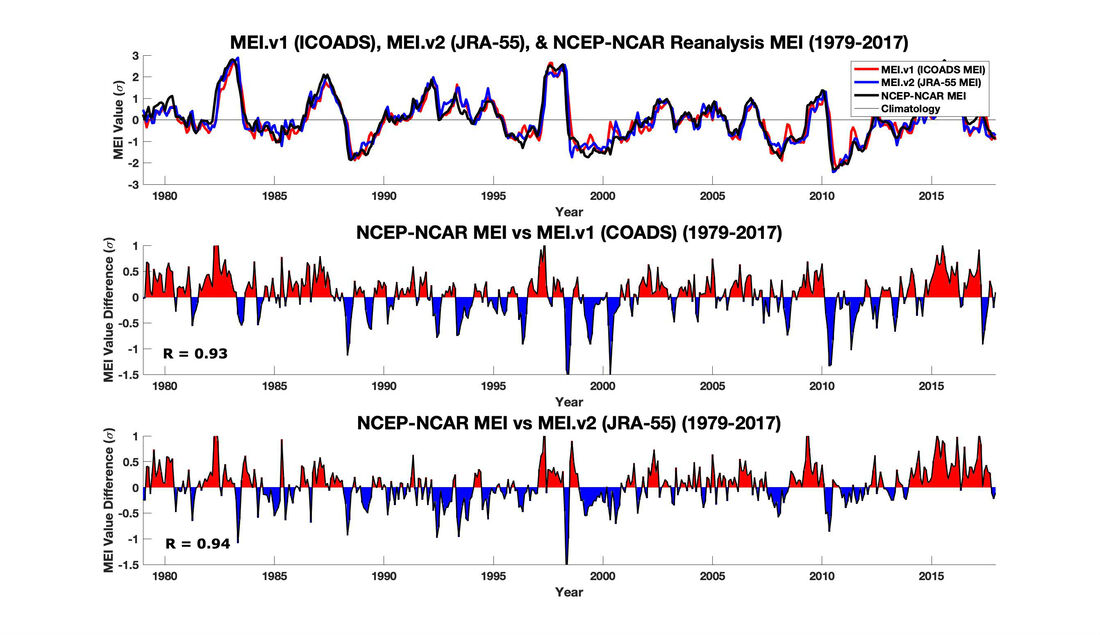 Figure 4. MEI.v1, MEI.v2, and the NCEP-NCAR MEI (1979-2017). MEI.v1 (ICOADS MEI) (red), MEI.v2 (JRA-55 MEI) (blue), and NCEP-NCAR Reanalysis MEI (black) time series (top), NCEP-NCAR MEI minus the MEI.v1 time series (middle), NCEP-NCAR MEI minus the MEI.v2 time series (bottom). Bi-monthly MEI values where the NCEP-NCAR was higher (lower) than either the MEI.v1 or MEI.v2 are red (blue). Units are in sigma. Pearson correlation coefficients between the NCEP-NCAR MEI both the MEI and MEI.v2 are denoted in the bottom left corners of the bottom 2 subplots. Created using Matlab 2019a.
Due to the appreciably low loadings of some of the observed variables in the subtropical North Pacific and far southeastern Eurasia in addition to overlap with the Pacific Decadal Oscillation whose EOF is captured poleward of 20N, the analyzed region to compute the PCs all variables were at least narrowed to (20N-30S/100E-80W) as opposed to (30N-30S/100E-70W) in the original MEI, also reflecting the modest, yet notable hemispheric asymmetry in ENSO loadings, w/ slightly higher loadings and variance in the southern hemisphere, partially reflective of the "Southern Oscillation". The EOF region for SST, Surface Air Temperature, & Precipitable Water were further narrowed to 160E-280E, 15N-20S to focus on the highest EOF loadings in the cold tongue region of the Equatorial Pacific. U wind was narrowed even further to also isolate the highest EOF loadings near and just east of the International Dateline. Here, zonal wind variations at the eastern edge of the Indo-Pacific Warm Pool tend to slightly lead subsequent variability in other MEI parameters due to disruptions in the wind-gravity balance that trigger eastward propagating, equatorially-trapped, downwelling Oceanic Kelvin Waves which suppress the thermocline and raise the SST anomalies near and east of the International Dateline. These EOF regions and the corresponding variables are shown in figure 5 below. 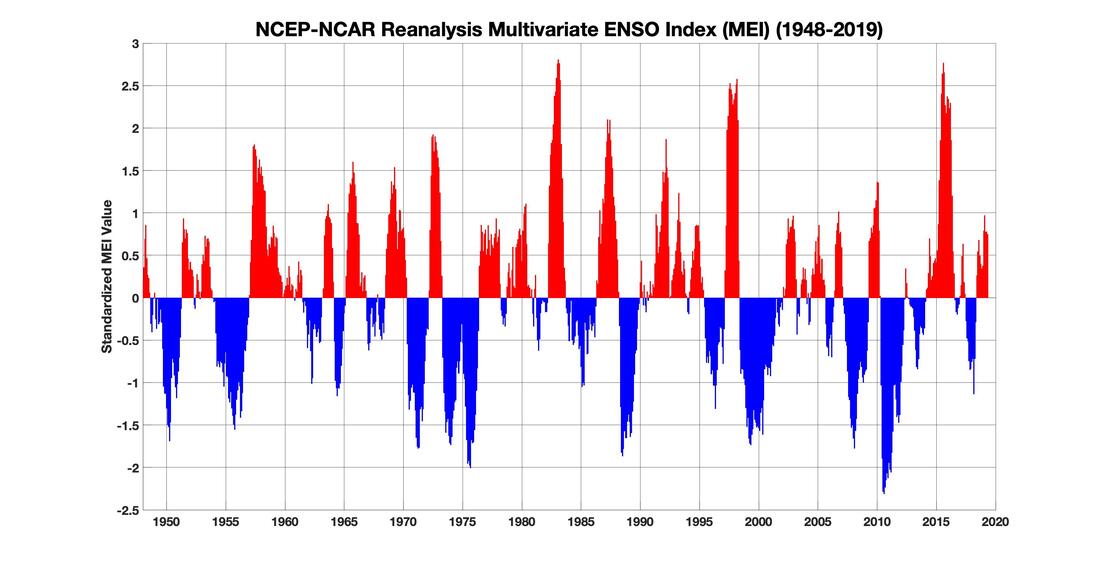 Figure 6. NCEP-NCAR Reanalysis MEI Time Series (1948-May 2019). Created using Matlab 2019a
Analogous to Klaus Wolter and Michael S. Timlin's Multivariate ENSO Index (MEI) and Extended Multivariate ENSO Index (MEI.ext), the data for each bi-monthly season was ranked, however they were inverted, with strongest El Ninos representing the lowest rankings and La Ninas delineating the highest rankings. Assuming percentile rankings, with the upper and lower 33rd percentile denoting ENSO events, bi-monthly rankings that are at or below 23 can be characterized as El Nino, whereas rankings at or above 47 denote La Nina conditions. The 1st and 2nd deciles, as well as the upper & lower terciles (10th, 20th, and 33rd percentiles respectively) define Strong, Moderate, and Weak El Nino or La Nina events, while the top half of the upper decile, (i.e. ENSO events that reach or exceed the 95th percentile) are denoted as Super El Ninos and/or Super La Ninas. Due to the larger uncertainties in the Equatorial Pacific PCs that accompany La Ninas, the number of Super La Ninas per bi-monthly period is kept at or below the number of Super El Ninos throughout the entire record. Thus, the 66th rank denotes a Strong La Nina instead of a Super La Nina. 2 or more years that possess same standardized anomaly acquire a split ranking amongst them, leading to 0.5 values.

The aforementioned ENSO phases, intensities, as well as their respective rankings and corresponding percentiles are depicted in table 2. 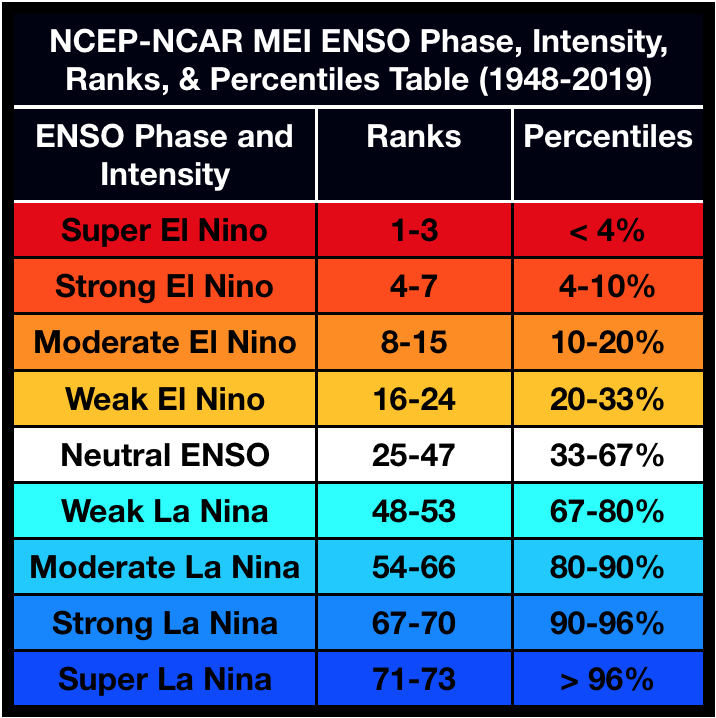 Table 2. NCEP-NCAR MEI ENSO Phase, Intensity, Ranks, and Percentiles (1948-2019). ENSO phase and intensity (left), ranks (middle), percentiles (right).
Rankings that met or exceeded the aforementioned ranking thresholds for 5 successive bi-monthly periods are bold and colored in red (El Nino) or blue (La Nina). Given how noisy the NCEP MEI could potentially be with bi-monthly averaging, potential ENSO events wherein this aforementioned ranking criteria is not met for just one singular bi-monthly period are also included as part of an entire El Nino or La Nina. If however, 2 more or successive bi-monthly ranks do not meet the defined ENSO thresholds, any prospective El Nino or La Nina is excluded from the record.